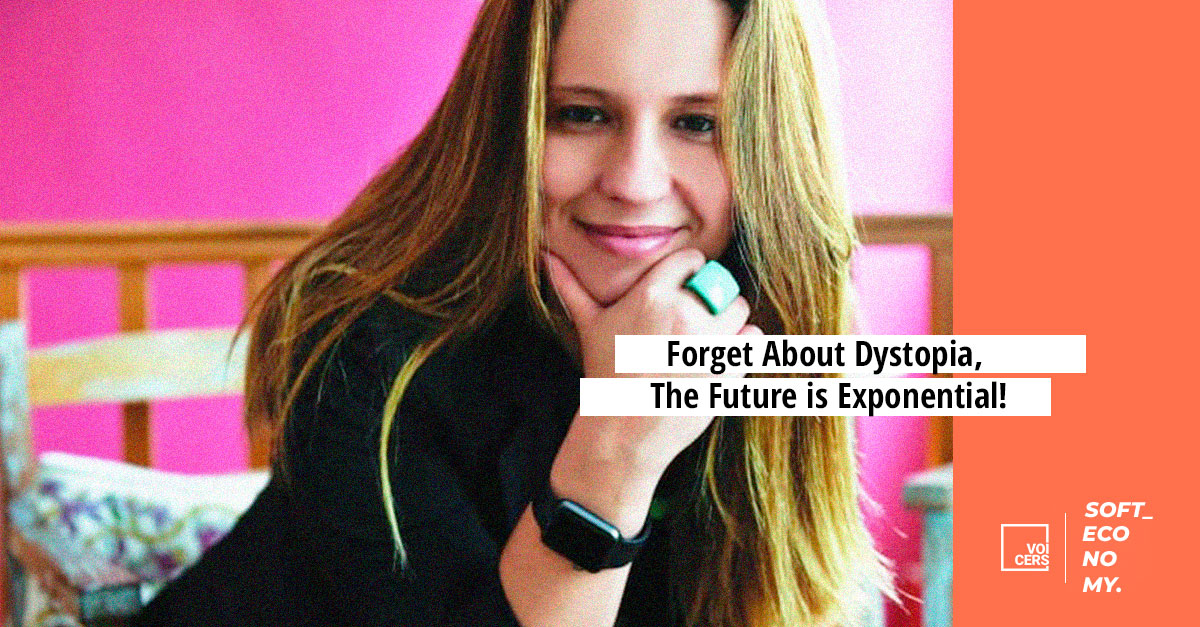 Forget about dystopia, the future is exponential!

Swimming against the tide, future thinker, Ligia Zotini Mazurkiewicz, believes, “The next great revolution will be a moral one, led by children who are now sitting on our laps.” It was with this strong belief that she created Voicers (www.voicers.com.br), a digital and educational start-up that works toward a noble purpose: to democratize access to technology and unite voices that think about the future. The goal is to portray the future—positively and exponentially—helping to avoid technological dystopias.

Before starting Voicers, Ligia, who obtained a bachelor degree in Business Administration, and a master’s in Marketing, had a twelve-year-long career working in multinational companies. She also worked as a Business and Language professor after participating in a Silicon Valley educational mission in 2016. She went back to Brazil determined to quit her job and search for a new purpose. Her heart was set on the idea that access to technology should not be restricted to small groups.

In 2016, as professor, she undertook an initial experiment which would become a major technology-diffusion project aimed at human education and training. “The years I worked in the corporate world were very important and happy years; but there was something that needed to be aligned. I felt the need to combine three characteristics that have always been with me: concern for education; passion for technology; and interest in a planetary consciousness, without borders,” she says.

She taught a course titled “Technology and Leadership in the 21st Century” for undergraduate students at the Faculdade Paulista de Pesquisa e Ensino Superior (FAPPES) during the one- semester course. “Since I could not tackle all the issues on my own, every week I invited someone— a voice—to talk to students. One would wear virtual reality glasses, another would bring a robot or a drone. In addition to this, the guest speakers had other amazing qualities: they were all fantastic human beings, and they all brought the vision to my classes: that appropriate technological training will prevent us from living in a dystopian future,” she says.

Ligia realized she was headed in the right direction and that a new life project was beginning to emerge when she monitored the success of one of the videos from her classes, which had thousands of reactions, comments and shares on social media. “As much as young people are connected to technology, in general, they are not the creators, inventors of all this. This helped the classes become very successful and reach broader audiences,” she recalls. At the same time, she felt that those activities and understanding of the technology linked to the exponential growth of human beings, could not be restricted to the classroom. This is how Voicers came about: focused on spreading ideas by people who anticipate the future and are experts in the areas of technology, science, innovation and, of course, human development.

To outline the project, she first brought together people with whom she had contact in the corporate world, and who are very knowledgeable in their areas. “But I always bear in mind that these partners of mine must be more than just very knowledgeable. That alone is not enough. They must also be lucid human beings with different qualities, including diversity and plurality.”

That’s how Voicers was born, in opposition to the multiple dystopias, which, especially in the movies and series produced in the US, presenting a devastating future. “I do not believe the future will be what Hollywood cinema has become used to showing us, which is to unite the best of technology with the worst in humans. We need to believe in exponential technology where human beings also use all their capacity for transformation,” argues the entrepreneur.

As a digital platform, Voicers currently brings together around 50 professionals from different areas and backgrounds who believe in technology, and in the potential of human beings, as long as educational work is involved. It’s as if these people already lived in the future and used the platform to amplify their voices, helping society prepare for the upcoming decades.

The platform has professionals from different areas such as Communication, Engineering, Administration and Design, who produce videos and broadcast them on the Internet. In addition, there are technological-experience activities aimed at groups, individuals, colleges or companies, as well as face-to-face meetings in various formats known as Tech Talks. The contents are grouped into three main thematic groups: technology, trends, and people in the 21st Century.

“When a machine does something better than a human being, it is, therefore, an inhuman work. What will be left when machines do the work that people used to do? We need to prepare people to create, care, heal, know, and share. That’s our job and our focus,” she explains. When it comes to human relationships in the future, Voicers’ vision is clear on the need to train people to live with diversity and plurality, constructing their own stories regardless of stereotypes and patterns. In addition, we must prepare for changes in the workplace and in the way we teach and learn.

In the future, there will be fewer opportunities for formal employment, which, if properly prepared for, can lead to the surge of great talents. Organized in new forms of employment relationships, the professionals of the future will not seek employment, but rather sources of income, using their talents in a plural form. The group argues that the security of employment contracts and stability can often mask real talents, and in this world, school must never remain centred on the reproduction of content that can be easily accessed. “Skills, in the future, will not be measured by the ability to remember things, but by what people will be able to create,” Ligia says.

After two years into the project, Ligia has already received positive feedback from several technology and automation companies. Despite that, she had to learn to deal with those who only see the negative aspects of technological advances. Some come to ask: “But won’t there be more unemployment?” To these, Ligia generally says: “There will be more people who can become unemployable, that is, they will lose their jobs. These are the people you have to prepare for inventive activities.” And what about fear? How do we deal with it? The answer is similar: The fear we are experiencing is a fear of the unknown, and Voicers’ proposal is to create narratives that would serve as bridges to the future.

By Midierson Maia and Fabiano Ormaneze